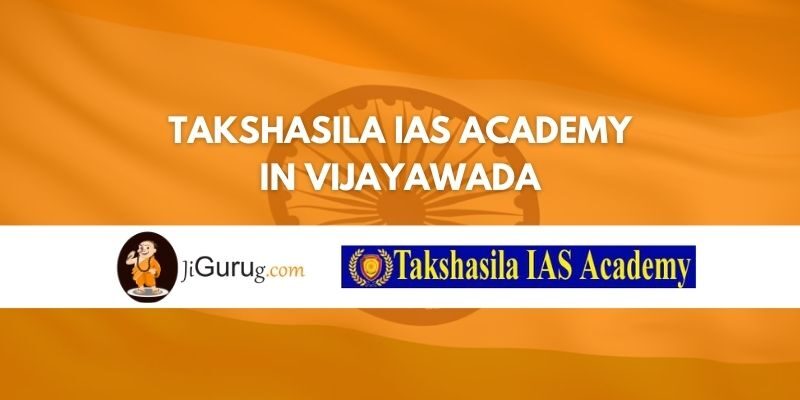 Takshasila IAS Academy in Vijayawada believes in creative education as they also try to develop hidden skills and talent of students so that they can relish the education. The faculty team of Takshasila IAS Academy in Vijayawada imparts detailed knowledge and quality subject to the candidates so that they achieve their goal of becoming IAS officers. Also, the faculty keep their attention on every student to make sure that they are performing well or not. 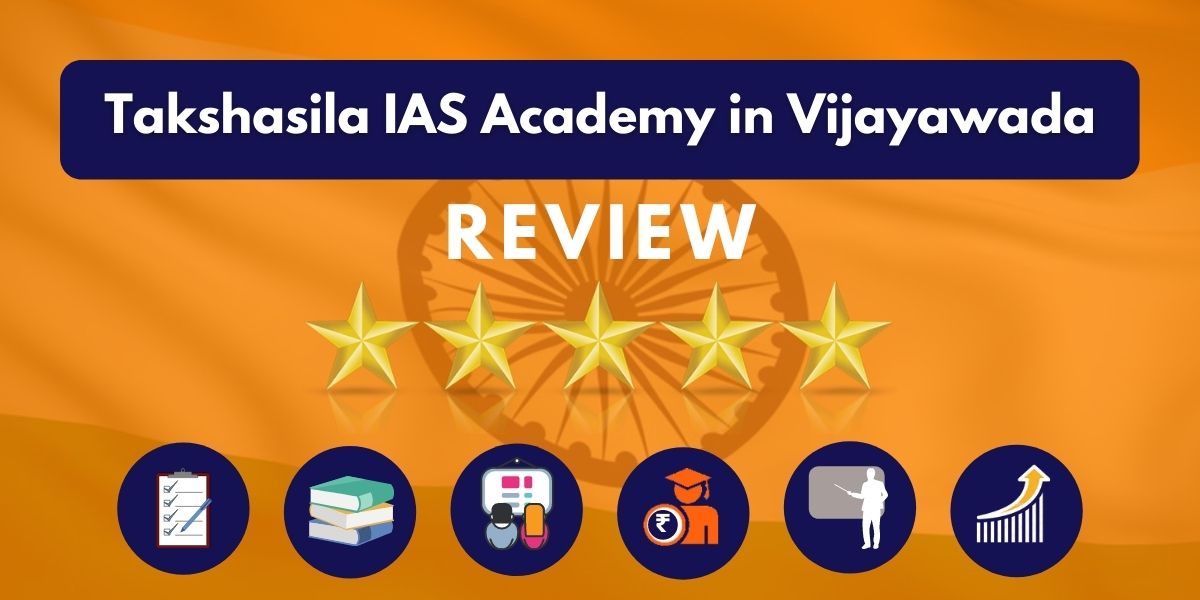 The fees of Takshasila IAS Academy in Vijayawada are not Disclosed.

Ratings out of 10 – Best UPSC Coaching in Vijayawada

Click on the Whatsapp logo to Join Offline UPSC Coaching in Mumbai.

Faculty: The faculty of the institute is well trained and some of them are retired UPSC Officials. They are very well-experienced in teaching Civil Service batches.

Past year result: Previous year result was good. Many students got selected for UPSC exams. But the names of selected students are not disclosed by the academy.

Study materials: The academy’s study materials, which are specifically prepared by the expert faculty team, are revised and detailed. These study materials are very helpful for students during classes as well as at home

Infrastructure: There is good infrastructure. Classrooms with a clean study environment are well furnished and spacious.

Batch size: The batch size of Takshasila IAS Academy in Vijayawada is not so large. It is about 50 students per batch.

Surekha Chitti – I spoke to previous students students studying here.
Ask the management to give contact of your region students.
They will provide contacts.
I found this is good.

mahindra kadali – I’m student of Takshasila IAS Academy.
My name is mahendra staying in hostel.
I think sarat ias institute is trying to make fake reviews to Takshasila to mislead students and parents.
Anyone can visit the institute and interact with any student and know the standards of takshasila ias academy.

ahana parthasarathy – I posted a review an year ago thinking that would help people. I received a reply from the owner stating “This is a Planned Fake review from other IAS Institution. There are NO SUCH INCIDENTS happened in Takshasila. other low rated institution director in vijayawada, who is not worth to compete with takshasila standards, try to plan these kind of filthy fake reviews.”
When I am accused of something I have nt done, I would put all my energies to prove my point.
So here are the proofs that I am not wrong and NOT FAKE,
1. FACULTY
a. The academic director Dr. N.N Rao IAS has been accused for not taking action against liquor shops
b. Ethics teacher, Ch. Syam Prasad IPS has been accused for withdrawing HRA
c.Mr. Abhishek Baranwal has completed his M.A in 2010 but the institute claims that he has more than 15 years of teaching experience. *sigh*
d. Omkar Nath mishra, known as the upsc ranker. Please do mention your rank.

2.ADVERTISING
a. same rank holders since years. The fun fact is they didnt attend the coaching here completely.
b. So many reviews. More than the number of students I guess. Fine fine but wait where are the negative reviews that I saw a while ago.
c. Every member related to the academy would always be posting about Takshasila.. check the quora mates!
d. All the stuff they show that they are doing to be the best college is just for the photo and video part( confirmed with a regular student a few minutes ago) and oh man! you and I both know that business runs with advertising. The student said, “we had a parade in a small street for 5 mins”. Well summed.
e. Brain washing, look at the website and you would realize why I mentioned it.
FAKING: this needs a special point
a. Blaming the opponent for your administrative failure. Grow up ! (but you say blaming is allowed in business. right right my mistake)
b. Everyone likes this institute so much that almost all present with 5 stars- fishy! (dont you think they are forced reviews?)

P.S : It is an authenticated news that the classes are not functioning well. So please dont make the same mistake that I made. If they would have atleast agreed to their misfunctioning presented in my previous review, I would nt have been this sarcastic. Well god has his own plans.
I dont want you to fall into the trap. Do make sure or check twice or do whatever it takes. Because it should nt take a toll on your mental health.

MOST IMP P.S:This has not originated from my imagination and I dont think I would spend time to give fake reviews. I would rather watch something on netflix and eat chips. jokes apart.
Please reconsider your decision. Feel free to mail on [email protected]
source: google, quora, alumni of takshasila

Which is the Best IAS Coaching Centres in Vijayawada?

Q. What are the Batch timings of Takshasila IAS Academy in Vijayawada?

Ans. At the same time, Takshasila IAS Academy runs different batches. These batches start from 9:45 am to 9 pm on all weekdays including Sunday. On Sunday Takshasila Academy takes weekend batches for students who are not able to attend classes during weekdays (Monday to Saturday).

What is the best coaching for the UPSC in Vijayawada?

Q. Do Takshasila IAS Academy in Vijayawada provides tips & tricks beyond the syllabus to score better?

Ans. Yes, according to our research we come to know from various students that Takshasila IAS Academy provides impressive tips and techniques beyond the syllabus to score better and complete any question fastly.

Q. How is the infrastructure & environment of Takshasila IAS Academy in Vijayawada?

Ans. After detailed research about Takshasila IAS Academy, we come to know that infrastructure and environment are very good and impressive. Classrooms with a clean study environment are well furnished and spacious.

Q. What is the batch size of Takshasila IAS Academy in Vijayawada?

Ans. The batch size of Takshasila IAS Academy in Vijayawada is not so large as the academy wants to give personal attention to every student for their better preparation. It is about 50 students per batch.