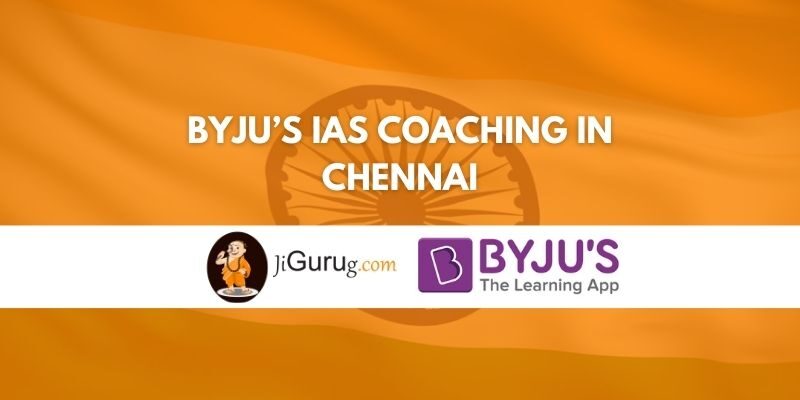 One of the premier Civil Service Training Centers in South India is’ BYJU ‘S IAS Coaching Academy in Chennai. Tablets (7 inches or 10 inches) with video lectures and weekly Current Affairs updates will be provided to all enrolled students to allow for a diverse and interactive experience. Our experienced Delhi faculty will also provide customized notes along with comprehensive training tips and tricks to incorporate UPSC training seamlessly into the busy lives of both working professionals and students. Our Chennai center currently only accommodates weekend batches and our batch sizes are small to ensure students get hands-on mentorship. Aspirants can hit us for more information on 9739018253 or come down to our Adyar hub.

Faculty: The names of the faculty at our IAS Coaching Centre is given later in the article.

Test series: BYJU’s IAS Coaching take practice tests and ace the Civil Services Exam. BYJU’S IAS Coaching Institute conducts weekly tests (MCQs and subjective) along with an All India Prelims & Mains Test Series – 20+ tests for GS and CSAT for which rankings will be given. All India Prelims & Mains Test Series – An exclusive schedule covering CSAT & GS Papers will be followed which consists of 20+ Tests for both Prelims & Mains and rankings will be provided on the same.
Added to this, Weekly Test (1 Hr Duration) – On the Portions Covered (both Subjective & MCQ’s) conducted every Saturday.

Batch size: The batch size of the academy is large. There are more than 86 students in one batch.

Indresh Murli – Tablet course is designed to study at our convenient place to pursue the dream of IAS. Fees structure is comparably affordable to other highly named institutions. Instead of pouring lakhs of rupees at one shot. The Emi scheme is hugely accepted by the major crowd across the country.

Joel Mario – Classes are taken by Faculties from Delhi. Very limited aspirants per batch so there is better connectivity with the faculty.

Sujatha Ethirajan – Pls dont join Byjus….Very worst experience i got from Byjus… No proper response from them… jabez (manager he told)… Trying to cheat our money 2k(told yesterday-monday itself thy will transfer our amt 2k, but still nw i didnt receive our money or any calls frm thm…)not picking our calls…nearly tried 30times… So guys pls dont join here… Other local coaching center is gud wen compare to Byjus…pls dont waste ur money

MORE CONVERSATION IS THERE… WILL UPDATE TOMORROW… ALSO I HAVE AUDIO WITH ME…THE WHOLE CONVERSATION WHICH I HAD WITH JAGADESH, CENTER MANAGER JABEZ AND FRM HEADOFFICE SHIVA FRM BANG.

Q. How is the infrastructure & environment of BYJU’s IAS Coaching in Chennai?

Q. Do BYJU’s IAS Coaching in Chennai provide tips & tricks beyond the syllabus to score better?

Ans. Yes, BYJU’s IAS Coaching provides tips and tricks which help the students to score better in the exams, and with that tips and tricks, they also can enhance their knowledge.

Q. What are the class timing of BYJU’s IAS Coaching?

Ans.  BYJU’S IAS Coaching Centre runs only the Weekend Batches- and timings of those batches are:-

IAS by Heart Academy in Chennai

Why Should I Join The Prayas India